Pittsburgh, PA – In an effort to support the National Hockey League’s Gender Equality Month, the Pittsburgh Penguins Foundation is proud to commemorate girls and women in hockey by hosting “Her Hockey Night” during the Sunday, March 31 game against the Carolina Hurricanes.

The Penguins Foundation urges all fans during Sunday’s 5 p.m. game to join us in honoring all women in hockey – from the littlest Pens fan to the inspiring women forever changing the game.

Outside of the Key Bank Club, near section 104, the Penguins Foundation will be showcasing an auction with an array of items geared toward our female fans. This includes a variety of jewelry, a Penguins ladies’ basket, a yoga basket, and much more.

Along with the themed auction, “Her Hockey” bags will also be available for purchase outside of the Key Bank Club. The bag will include a Penguins Foundation themed drawstring bag, a Love Your Melon beanie, a Pittsburgh Penguins Wives + Girlfriends Association “Welcome to our Table” cookbook, a mystery warm-up puck from a game during the 2018.19 regular season, and a mystery autographed item. This promotion will only be available in-arena during “Her Hockey Night” on March 31.

Fans are welcomed to remember the night by visiting the Moxie Photobooth station, located in the Highmark Hall of Champions, behind the Captain Morgan Club, where they will be provided with a take-home print. Fans are encouraged to post their photos using #HerHockey to commemorate the night.

In advance of the March 31 game – and in an effort to further promote girls and women in hockey – the Penguins Foundation urges fans to participate in a social media contest, asking fans to tweet and share what hockey, and Penguins hockey, means to them.  One lucky winner will be awarded with two free tickets to the March 31 game. The contest is underway now and a winner will be chosen on Friday, March 29 at 3PM.

For more information about the Pittsburgh Penguins Foundation regarding our mission, programs, events and news, please visit pittsburghpenguinsfoundation.org. 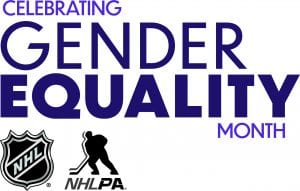