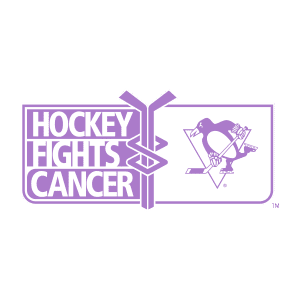 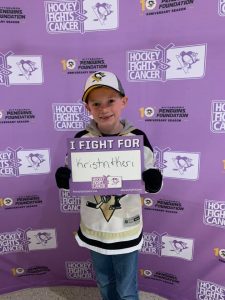 The Penguins will hold their annual Hockey Fights Cancer (HFC) Awareness Night on Monday, March 29, when the Pens take on the New York Islanders at 7 pm at PPG Paints Arena.

The celebration of hockey’s support for the fight against cancer is part of a League-wide initiative to raise awareness and funds for the Hockey Fights Cancer initiative.

Penguins’ players will wear commemorative purple jerseys during pregame warm-ups.  Players jerseys along with their purple-taped sticks will be autographed and available for bid at auction online.

The auction will run from March 29 to April 5 at noon EST.  Fans can bid by texting pensHFC to 76278 or visiting pensHFC.givesmart.com.

As part of the NHL’s “I Fight For” campaign, support cards/signs will be available online for fans to personalize.  Show your support by displaying your I Fight For card on social media!

All proceeds from the Penguins’ Hockey Fights Cancer fundraising will benefit the UPMC Hillman Cancer Center and the Mario Lemieux Foundation.

Fundraising is an important part of the fight against all forms of cancer.  The Penguins encourage all fans to support the cause on social media and by visiting the Penguins Foundation’s HFC Commemorative Jersey Auction and Warm-Up Pucks sale at www.pittsburghpenguinsfoundation.org.

Join the Pittsburgh Penguins Organization & Get In the Fight!